Two properties of the Gaussian distribution

This blog post has two parts. First, I will introduce the joint, marginal, and conditional Gaussian distributions for the case of two random variables; an interactive Shiny app illustrates the differences between them. Second, I will show mathematically that the marginal and conditional distribution do indeed have the form I presented in the first part. I will extend this to the $p$-dimensional case, demonstrating that the Gaussian distribution is closed under marginalization and conditioning. This second part is a little heavier on the mathematics, so if you just want to get an intuition you may focus on the first part and simply skip the second part. Let’s get started!

The Land of the Gaussians

In the linear regression case discussed previously, we have modeled each individual data point $y_i$ as coming from a univariate conditional Gaussian distribution with mean $\mu = x_i^Tb$ and variance $\sigma^2$. In this blog post, we introduce the random variables $X_1$ and $X_2$ and assume that both are jointly normally distributed; we are going from $p = 1$ to $p = 2$ dimensions. The probability density function changes accordingly — it becomes a function mapping from two to one dimension, i.e., $f: \mathbb{R}^2 \rightarrow \mathbb{R}^+$.

where $\sigma_1^2$ and $\sigma_2^2$ are the population variances of the random variables $X_1$ and $X_2$, respectively, and $\rho$ is the population correlation between the two. The general form of the density function of a $p$-dimensional Gaussian distribution is

where $\mathbf{x}$ and $\mathbf{\mu}$ are a $p$-dimensional vectors, $\Sigma^{-1}$ is the $(p \times p)$-dimensional inverse covariance matrix and $|\Sigma|$ is its determinant.1 We focus on the simpler 2-dimensional, zero-mean case. Observe that

which we use to expand the bivariate Gaussian density function: 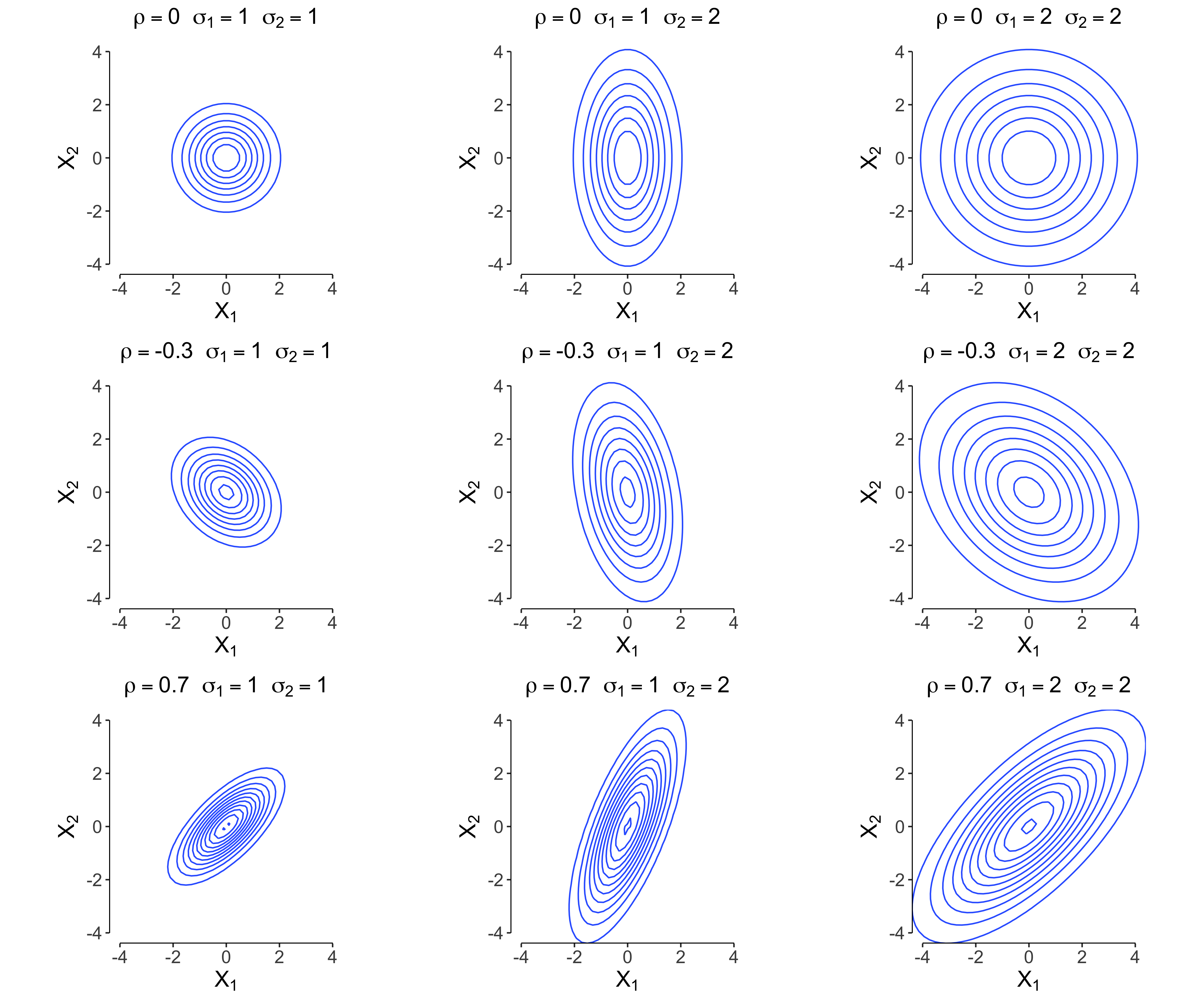 In the top row, all bivariate Gaussian distributions have $\rho = 0$ and look like a circle for standard deviations of equal size. The top middle plot is stretched along $X_2$, giving it an elliptical shape. The middle and last row show how the distribution changes for negative ($\rho = -0.3$) and positive ($\rho = 0.7$) correlations.2

which is a simple univariate Gaussian distribution with mean $0$ and variance $\sigma_1^2$. On the other hand, incorporating the information that $X_2 = x_2$ results in

which has mean $\rho \frac{\sigma_1}{\sigma_2} x_2$ and variance $\sigma_1^2 (1 - \rho^2)$. The next section provides two simple examples illustrating the difference between these two types of distributions, as well as a simple Shiny app that allows you to build an intuition for conditioning in the bivariate case.

Two examples and a Shiny app 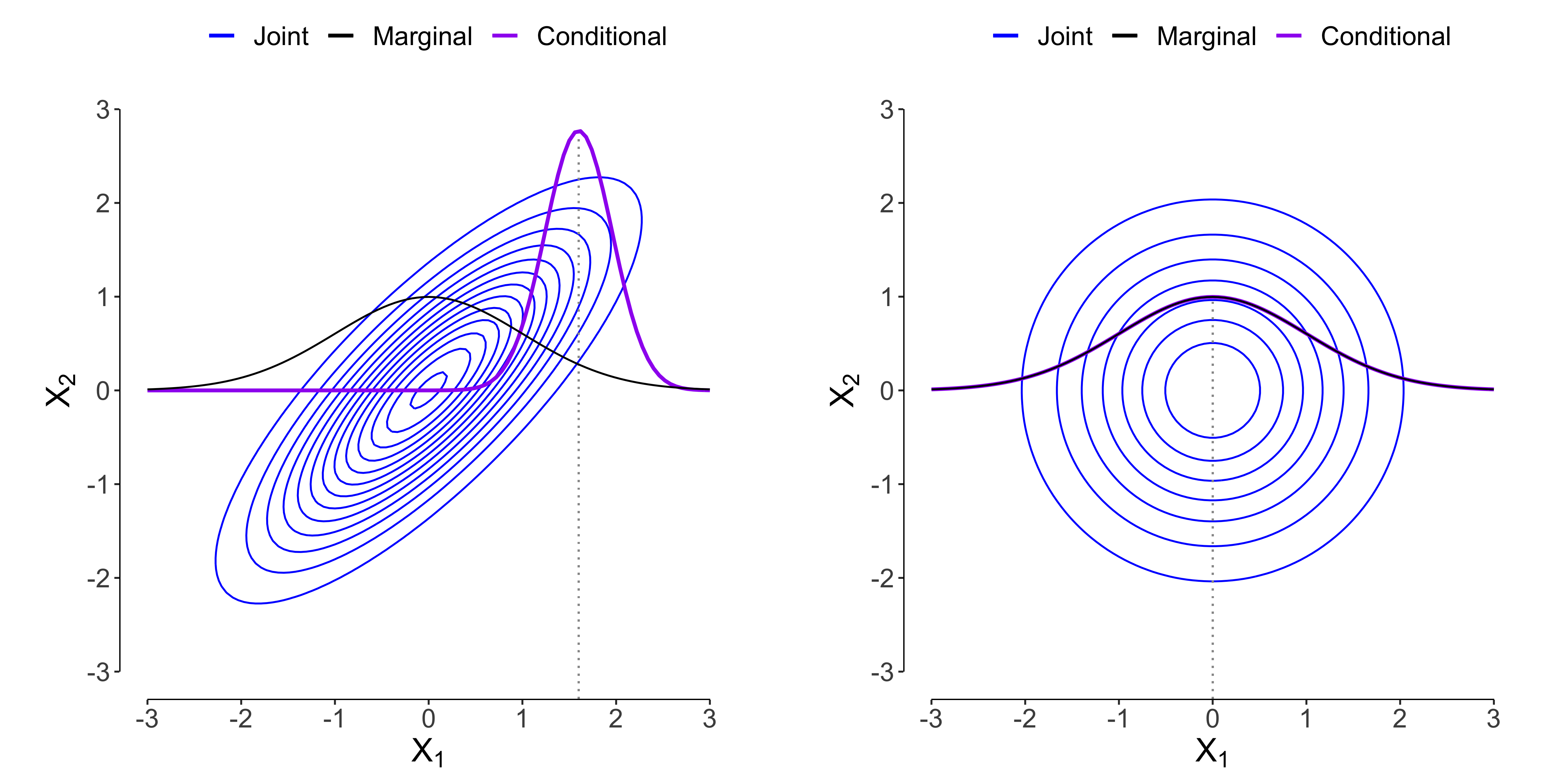 The two rules of probability

In the second part of this blog post, we need the two fundamental ‘rules’ of probability: the sum and the product rule.3 The sum rule states that

and the product rule states that

Property I: Closed under Marginalization

To show that the marginalisation property holds for the bivariate Gaussian distribution, we need to solve the following integration problem

and check whether the result is a univariate Gaussian distribution. We tackle the problem head on and expand

Putting everything that does not involve $x_2$ outside the integral, we’ve come quite far! Note that we can “complete the square”, that is, write

Continuing, we arrive at the solution

Granted, this process was rather tedious and not at all general (but good practice!) — does it also work when going from 3 to 2 dimensions? Will the remaining bivariate distribution be Gaussian? What if we go from 200 dimensions to 97 dimensions?

Second, from this it immediately follows that any subset of random variables $H \subset X$ are themselves normally distributed, and the mean and covariance is given by simply ignoring all elements that are not in $H$; this is called the marginalisation property. In particular, we choose a linear transformation that simply ignores the components we want to marginalize out. As an example, let’s take the trivariate Gaussian distribution

which has a three-dimensional mean vector and adds a variance and two correlations to the (symmetric) covariance matrix. Define

which picks out the components $X_1$ and $X_2$ and ignores $X_3$. Putting this into the equality from the definition, we arrive at

Two points to wrap up. First, it helps to know your definitions. Second, in the Gaussian case, computing marginal distributions is trivial. Conditional distributions are a bit harder, unfortunately. But not by much.

Conditioning means incorporating information. The fact that Gaussian distributions are closed under conditioning means that, if we start with a Gaussian distribution and update our knowledge given the observed value of one of its components, then the resulting distribution is still Gaussian — we never have to leave the wonderful land of the Gaussians! In the following, we prove this first for the simple bivariate case, which should also give some intuition as to how conditioning differs from marginalizing, and then provide the more general expression for $p$ dimensions.

Instead of ignoring information, as we did when computing marginal distributions above, we now want to incorporate information we have about the other random variable $X_2$. Conditioning implies learning: how does our knowledge that $X_2 = x_2$ change our knowledge about $X_1$?

Let’s say we observe $X_2 = x_2$. How does that change our beliefs about $X_1$? The product rule above leads to Bayes’ rule (via simple division), which is exactly what we need:

where we have suppressed conditioning on the parameters $\rho, \sigma_1^2, \sigma_2^2$ to avoid cluttered notation. Let’s do some algebra! We write

which already looks promising. Putting the $x_2^2$ term into the angular brackets, we should see a nice quadratic formula:

There’s only a slight problem. The inverse of the block matrix is pretty ugly:

There is hope: we are in an analogous situation as in the two-dimensional case described above. Somehow we must be able to ‘‘complete the square’’ in the more general $p$-dimensional case, too.

Scribbling on paper for a bit, we dare to conjecture that the conditional distribution is

For our conjecture to be true, it must hold that

This means that we have correctly completed the square! To clean up the business of the determinants, note that the determinant of a block matrix factors such that

Substituting this into our equation for the conditional density, as well as substituting all the $\Omega$’s with $\Sigma$’s, results in

In this blog post, we have seen that the Gaussian distribution has two important properties: it is closed under (a) marginalization and (b) conditioning. For the bivariate case, an accompanying Shiny app hopefully helped to build some intuition about the difference between these two operations.

To show that an arbitrary dimensional Gaussian distribution is closed under conditioning, we had to rely on a mathematical trick called ‘‘completing the square’’, as well as certain properties of matrices few mortals can remember. In conclusion, I think we should celebrate the fact that frequent operations such as marginalizing and conditioning do not expel us from the wonderful land of the Gaussians.5

I would like to thank Don van den Bergh and Sophia Crüwell for helpful comments on this blogpost.